An interview with Armin Falkenhein, honorary chairman of the ADFC Bayern – STEM on the Move

The ADFC Bayern is advising an international project that aims to teach scientific school subjects more clearly through exercise such as cycling in everyday life and in class. An interview with Armin Falkenhein, honorary chairman of the ADFC Bayern.

The international education project “STEM on the move”, funded by the Federal Ministry of Education and Research, aims to take a new pedagogical approach and bring more movement into the classroom and into everyday life. STEM stands here for the English abbreviation of mathematics, computer science, natural science and technology, in this country abbreviated as MINT subjects. Physical activities such as swimming, throwing and cycling are used to get pupils* interested in science.

Prof. Dr. Moritz, head of the Innovation Manufactory in Munich and initiator of the project, had asked the ADFC Bayern to provide the technical input for the focus on cycling and, among other things, to provide content for the teaching units on cycling technology. The ADFC is one of seven German project partners on the topic of cycling and cooperates with six cycling partners in South Africa. These include the organisation Stellenbosch fietsry, quasi the ADFC of the university town of Stellenbosch in the Western Cape Province. Social environmental projects such as Durban Green Corridors are also involved. After telephone and video conferences, the project partners met live in South Africa for the first time in January 2020.

Armin Falkenheim, honorary chairman of the ADFC-Bavaria and bearer of the Federal Cross of Merit, advises the international education project and contributes his many years of experience in promoting cycling. We asked him questions about the project.

Why is the ADFC Bayern involved in the project?

The importance of sufficient exercise in everyday life is well known. With this project, the ADFC can provide more exercise, increase acceptance of the bicycle as a means of transport and help to get young people excited about science through cycling. This is motivation enough to take part in the interdisciplinary and innovative project “STEM on the move”. The ADFC, as an association for cycle transport policy, has many years of experience in how to anchor the bicycle as a means of transport in politics, so that local conditions for cyclists are improved and they are brought into focus. Sustainability and sustainable mobility are a huge topic worldwide; and I am convinced that consistent promotion of cycling will help to achieve the sustainability goals of the United Nations.

What are the first experiences with international exchange?

During my stay in Stellenbosch and Durban I could of course only get a first impression. But it is obvious that cycling in South Africa is currently much more difficult than in Germany

The university town of Stellenbosch in the Western Cape Province is a very big exception in South Africa. The university environment, the historical links to the bicycle-loving Netherlands and such great organisations as Stellenbosch fietsry have created an almost bicycle-friendly climate here. There are rental bikes for students*, a bicycle city map and first cycle paths. Cycling as a recreational activity is also widespread. We are keen to promote this further and are therefore working intensively with schools on curriculum content.

In Durban, on the other hand, the focus is on promoting cycling among children from poorer backgrounds. Our project partner Durban Green Corridors works with social workers in less privileged areas. Besides homework supervision and additional lessons for the pupils, BMX and MTB sports are also offered. The children are provided with bicycles. Owning their own bikes is financially hardly conceivable for most of them. The social differences in South Africa are very big, and so is the access to education. Such projects give children from difficult social backgrounds a chance. The interest of the teachers is correspondingly great. We work closely with math teachers in particular to bring together the subject and the fun of cycling.

The bicycle is not only important for the lessons, but also for the way to school, which is often much longer than in Germany. Has the bicycle as a means of education already arrived in South Africa?

My few impressions on site rather indicate that the bicycle as a means of transport for the way to school is very difficult. People who need it cannot afford it. In the cities and townships, many of them are afraid of being mugged on their bikes. In addition, there are hardly any cycle paths and the car traffic shows extremely little consideration for cyclists on the roadside. Nevertheless, more and more people are recognising the potential of cycling. They see the international developments and also what organisations such as World Bicycle Relief (WBR) and Qhubeka are doing, which in South Africa and in other countries equip schoolchildren and health workers in rural areas in particular with robust bicycles. Here it becomes clear that cycling can help children and especially girls to gain access to education.

What are the initial results and how are they being implemented in German schools?

Under the leadership of the TU Braunschweig, the project group developed the first teaching units with learning goals for sport, biology and technology for the fifth to seventh grade. These are now to be tested and further developed. Therefore, we invite teachers here in Germany to try out the teaching units in order to help us later with tips for practical improvements. Nationwide, the schools that are involved under the umbrella of “schoolbikers.de” are of particular interest. All project partners* are very happy about support! Inquiries can be addressed to the ADFC-Bavaria under the keyword STEM. 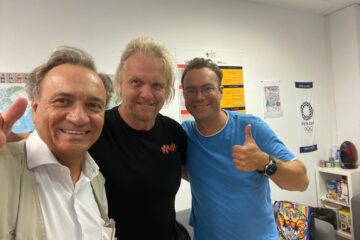 After working very closely with partners in South Africa on STEM on the move and collecting ideas, inspirations, and multipliers from England, we took the post covid opportunity to deepen the cooperation with Spanish partners Read more… 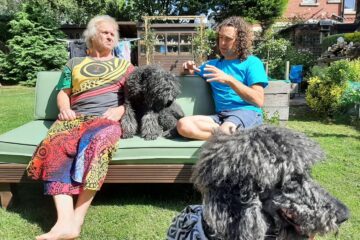 From STEM to STEAM

STEM can be very exciting when it is taught in interesting ways, like using play, movement and experiencing as key motivators. With this vision we embarked on our journey to bring the joy of movement, Read more… 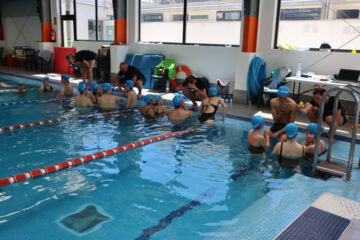 cosinuss° developed an in-ear sensor specifically for swimming purposes, which is able to record vital parameters and also withstands the challenges of being used in water. cosinuss° was eager to test and demonstrate the technology Read more…